BY RAY HARTLE
Anglican Archbishop of Cape Town Thabo Makgoba says President Jacob Zuma must ensure that miners and their families who were victims of the Marikana shootings are provided with legal support.
Makgoba, who was speaking during a conference of the Anglican Church of Southern African in Johannesburg, has written to Zuma stating that the Commission of Enquiry into the shootings must be seen to be acting justly.
He  said the government was financing the costs of the commission as well as the legal representatives of the police officers who will appear before it.
"However, it seems that similar legal support is not being equally extended to the miners themselves nor to the families of those who lost their lives.
"I am deeply troubled at the message of apparent inequality this decision can be seen as conveying," he wrote to Zuma.
Makgoba also called on Christians in legal practice to offer their services on a pro bono basis to the miners and their families.
On the role of the church in society, he said:
"We need to reclaim our voice. I went to Marikana out of love because I believe in the dignity of each person and because the environment is crying (out for a response from us)."
Makgoba acknowledged that in South Africa, the Anglican church faced many internal crises, including a dispute between the bishop and cathedral parishioners in the Diocese of Pretoria which has reached the High Court.
Many also felt the church had been slow in recognizing the ministry of women and in dealing with the needs of those in same sex civil unions.
"These are challenges but it shows that the church is alive and is not immune to what is happening in society. It is important to see how we allow God's love to move us even in the midst of those problems."
Makgoba said the Anglicans Ablaze conference reflected "a synergy of positive energies within our church" with people of contrary worship and theological positions coming together.
"We should bring whatever challenges we have into this milieu and grow together as Anglicans.
Makgoba said that despite the diversity among Anglicans, certain "fundamentals" such as "breaking bread together", kept the church together.
Commenting on the appointment of a successor to Archbishop of Canterbury Rowan Williams, Makgoba said the global church faced major issues including new human identities and degradation of the environment, which required ongoing strong leadership.
Being Archbishop of Canterbury was "an impossible job. If you really believe that you are only a conduit for the grace and love of God, it is do-able.
"I hope that whomever becomes archbishop will take up where (Archbishop Williams) ended, inject theological strength into our debate, yet know that there are no easy answers.
"As an archbishop (the next incumbent) needs to create an enabling environment for people to really live what it means to be an Anglican in the beauty of our diversity."

Ray
Eastern Cape, South Africa
I'm a writer, journalist, columnist, teacher, stakeholder and public relations specialist, I argue, articulate, advocate, generate, innovate. I didn't publish my GSAN (great South African novel) as planned before my 30th birthday but using words to conjure up mental pictures is still the most fun I can have. And I split infinitives - damn!

The Ones I love 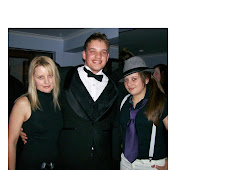